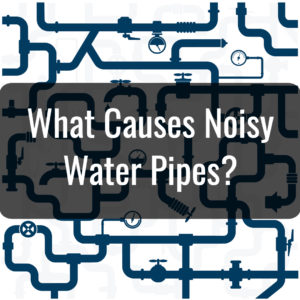 Kids may be loud, but your water pipes should never be noisy. Unfortunately, certain water pipes make noises due to clogs, weather and a myriad of other factors.

See what’s causing your noisy pipes and then, connect with a local plumber to make your house quiet.

What Are Noisy Water Pipes Are Typically Caused By?

Any suspicious noise coming from your pipes can be cause for concern. But no need to panic just yet, if you find the source of the noise it can be an easy fix. Here are a few situations that may cause noisy pipes:

Noisy pipes can be caused by several factors. Let’s start with what is commonly known as water hammer. Water rushing through the pipe and out the faucet moves with speed and force. When you shut off the faucet, the water flow is brought to an abrupt halt. But that energy has to go somewhere. Normally in the wall behind each hot and cold faucet is an air chamber in the pipe. It used to be about 10 inches of pipe soldered vertically.

Then, when the rushing water was stopped, it would push up that vertical pipe where it would hit a cushion of air in the pipe. That would prevent the water force from causing the pipes to rattle, or hammer. Now, there are commercial air cushions that are attached to the pipe in the same place that does the same job. Hammering can develop because over years, the air in that little vertical riser is lost, and thus the cushioning effect is lost.

How to Prevent Water Hammering

Eliminate water hammering by shutting off the main water, opening all faucets and then draining the whole house from the lowest faucet. When you restore water, air will again be pushed into the risers designed to prevent water hammer.

Another cause of noisy water pipes is a loose pipe under the house. The flushed water moves rapidly and in large volume and can cause a pipe to sway, setting up a rattling effect.

How to Fix Loose Pipes

Drain pipes are usually suspended from the floor joists under the house and a little stabilization may be all that is needed. By crawling under the house with a flashlight while someone flushes the toilet, you should be able to find the source by listening and looking.

A worn-out washer in a faucet or valve often causes whistling in water pipes or squeaky pipes. The direct source of this squealing is in the valves that connect to the washing machine.

How to Fix A Worn Out Washer

If you notice the squealing sound comes when the washer is on, you have an easy solution. First, shut off the valve and check the washers in the hose. Replace if they look worn or cracked. If that isn’t it, shut off the house water and repair the faucet. One of the faucet’s washers is likely worn or the valve seat is worn, causing water to be forced through a smaller opening and setting up the noisy pipes.

Another source of squealing water pipes, particularly when it seems to resonate through the whole house, can be either the main shut off valve for the house or the water pressure regulator.

How to Fix Main House Valve

For the main shutoff, turn off the water at the street valve first and then replace or repair the main house valve. If that isn’t it and you have a pressure reducer on your incoming cold water line, it may be in the reducer’s manifold.

Yet another noise problem can come from the toilet. If, after flushing, you hear a banging or rattling at the end of the filling cycle, then it is likely that the ballcock assembly, which controls the filling process, is worn.

How to Prevent Noisy Pipes from Your Toilet

Depending on the style and how new the ballcock assembly is, you might be able to repair it. Otherwise, replace it with a better one.

Loud pipes are not only annoying, but plumbing problems can also occur with noisy water pipes. Fortunately, the problems above can be fixed on your own. As always, if you need help along the way, ImproveNet can help you find a reliable and experienced plumber near you.