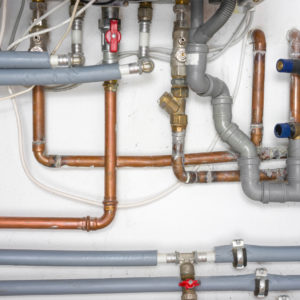 This article is by Leah Lopez Cardenas and published by Angi

Vibrating water pipes aren’t normal, so it’s essential to act quickly when you hear an unusual racket coming from inside the walls of your home

It can be scary (or at the very least irritating) to hear a rattling noise coming from your plumbing. Whatever you do, don’t ignore it! The first step is diagnosing the cause of your vibrating water pipes, and then you can work on getting your plumbing in working order again.

The noises you hear can not only be aggravating, but could lead to a pipe breaking because of the force of the banging. No one wants water damage or worse—the whole house flooded. That’s why it’s important to diagnose the problem and get those pipes repaired quickly once you hear rattling in the walls.

What Causes Water Pipes to Vibrate and Make Noise?

There could be a few different issues causing the rattling noise you hear in your pipes behind the walls, so that means there’s more than one option to solve the problem. Fortunately, none of them should be too invasive.

The problem could be a loose pipe, which needs to be secured to the wood framing with pipe clips. Ideally, you could access the pipes via an access panel or open area where the pipes are exposed (like a basement) rather than cutting through a wall or ceiling. Visibly inspect your pipes in open areas to see if they move around when someone turns faucets on and off or flushes a toilet.

Too-high water pressure can cause pipes to vibrate and also lead to long-term damage to your pipes and appliances. Indoor water pressure should be between 40 and 60 pounds per square inch (PSI).

You can purchase a water pressure gauge to test it yourself or hire a local plumber to test your pressure for you.

A water hammer is caused by fast-closing valves, like toilet fill valves and faucets. As the water flows through the pipes and the valve shuts off quickly, it causes the water to stop suddenly in the pipes, causing a “hammer” effect.

If you’ve lived in the house for a long time and the hammering effect has gradually gotten worse, it could be that you have air chambers connected to your pipes behind the walls. Air chambers help cushion against water hammers, but they fill with water over time and need to be drained to allow them to refill with air. This can be done easily by most homeowners by shutting off the water main valve, opening up the faucets, and flushing the toilets starting at the highest level of the home and working their way down to the lowest level until all the pipes have drained. Once the lowest pipe runs clear, close that drain and turn the water main back on.

How to Fix Loud or Shaking Water Pipes

To start, check to make sure your pipes are secured and loose pipes aren’t your problem. If high water pressure is the issue, adding a pressure-reducing valve to your incoming main line could correct it and help your water fixtures last longer over time.

Adding arrestors to the vibrating pipes could correct the water hammer, but that can involve cutting and soldering pipes and would likely require the experience of a plumber. Ideally, the plumber could add the arrestor to the pipes where they are already exposed without cutting through drywall. One possible solution to the water hammer could be replacing your traditional toilet fill valves with slow-shutting ones.

Water damage can be a major headache, not to mention expensive to repair, so you want to find a well-vetted plumber to help diagnose and treat the problem if you’d rather not risk flooding your house with a DIY gone wrong. It typically costs around $175 to $450 to hire a plumber—pocket change compared to the thousands you’d have to spend to fix leaking pipes and repair wet drywall if your vibrating pipes burst.