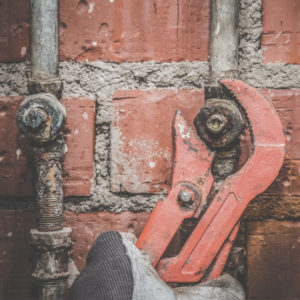 Unless you’re currently living in a brand-new home, there is a good chance that your household plumbing could stand to be updated. Many homeowners fail to realize the warning signs associated with plumbing damage until it’s too late.

Plumbing experts Cummings Plumbing Heating and Cooling of Tucson, Arizona, provide their insight into household plumbing systems. They share the top four indicators that your plumbing system needs to be replaced.

Cummings Plumbing claims that where and when your home was built will indicate which type of material was used for the piping. The pipe material will then help you figure out if it’s time to replace your household plumbing system. For example, most modern plumbing systems feature either brass, copper, or polyvinyl chloride (PVC) pipes. However, if your home is older, it’s possible that materials like lead, iron, or galvanized steel were used. Each material has a slightly different lifespan that all homeowners should be aware of.

The age of the pipes isn’t a hard and fast rule, says Cummings Plumbing Heating and Cooling — if they’ve been well-maintained, they can last longer than the average lifespan. On the other hand, if they have been poorly maintained or had hard water with a high mineral content flowing through them for years, they may require a plumbing replacement before they reach the average age. However, the average age of piping can help serve as a guideline if you have no idea whether your old household plumbing system needs to be replaced. Brass and galvanized steel supply pipes will typically last between 80 and 100 years, while copper supply pipes will last between 70 and 80 years. Meanwhile, cast iron drain lines have a similar lifespan as brass or steel pipes (80 to 100 years), which is in stark contrast to PVC drain lines which on average, last a mere 25 to 40 years. In most newly built homes, the material or age of the pipes likely won’t be a problem, but in old households it’s definitely worth checking, especially if you are starting to have frequent plumbing issues.

The reality is that if your piping has a leak or multiple leaks it can damage the foundation and framing of your home, leading to wood rot or even the growth of mold. Mold is especially dangerous as it can go on to affect air quality to the point that it may be dangerous to one’s health if undetected. Cummings Plumbing Heating and Cooling claims that one way to see if the low water pressure is caused by a clog is to use a drain cleaner. If the problem is fixed, then the low water pressure was likely caused by a clog somewhere in the pipe. However, if the drain cleaner did not fix the problem, then you may have a leak on your hand, which means it’s time to call a professional for a plumbing repair or replacement.

According to Cummings Plumbing Heating and Cooling, your house might be in need of plumbing replacement or repair if you’re experiencing discolored water. The only exceptions to this are if you are living in an area under a boil water advisory or if you rely on well water or live in a rural area. Otherwise, water discoloration, especially water that is tinted brown or dark in color, is typically a sign that your pipes are corroded. The color you’re seeing is the result of corrosion, which has led to rust that is seeping out slowly as the water flows through your pipes.

If corroded supply piping is left untreated, mineral deposits can end up clogging the pipes, which creates pressure within the piping. Eventually, this build-up of pressure will become too much and cause your pipes to burst. A burst pipe will result in much greater damage which will likely be more costly to fix than if the pipes had been replaced to begin with. That is why Cummings Plumbing Heating and Cooling of Tucson, Arizona, urges anyone who notices discolored water flowing through their faucets or down their drains to call a technician immediately. Not only can drinking such water have adverse health effects, but it is a serious sign that your plumbing system is in need of attention.

Once you have been able to locate the exposed pipes, you can then assess them. These exposed pipes will give you insight into the overall condition of the plumbing system in your home. When assessing the piping, look for anything out of the ordinary, such as discoloration, bumps, flaking, or dimpling. The exposed pipes will also help you deduce what material the pipes in your home are made out of, if you don’t know this information already. In addition to looking at the pipes themselves, it’s also a good idea to check around the pipes for pools of water or condensation, which could be evidence of corrosion or leaking. Moisture on the pipes doesn’t necessarily mean you need an entire plumbing replacement, but there is likely a repair that needs to be done in the way of tightening the pipes or sealing a leak.