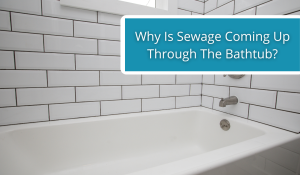 When sewage begins backing up into your bathtub, it can be both a nuisance and a health hazard. Not only does this unsanitary situation create a mess that needs to immediately be cleaned up and disposed of, but it also poses potential health risks due to the presence of hazardous bacteria and pathogens that accompany sewage water.

It’s important to thoroughly clean and sanitize the affected area, as well as identify the root cause of the backup in order to ensure the problem doesn’t continue. Failing to properly address a sewage backup can easily lead to further issues down the line.

What Causes Sewer Backup In A Bathtub?

Sewer backups in bathtubs can be caused by various issues, a few of the most common including:

Blockages Due To Debris Buildup

Sewage backups occur when debris builds up along the pipes and prevents water from easily flowing down the drain. While occasional small clogs from everyday materials can usually be cleared with a plunger, heavier debris buildup can cause significant blockages that prevent liquids such as sewage from exiting the pipes. 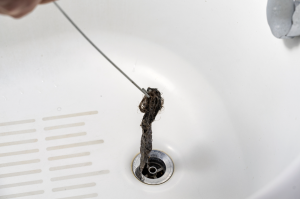 In cases of extensive debris buildup, a blockage can build up large enough to cause toilet water, wastewater, or even sewage to then back up further into other parts of the plumbing system such as tubs and showers without warning.

To avoid sewage backup it is important to use relevant products such as strainers and sink plugs on sinks, bathtubs, and showers to help limit potential clogging material. If a clog has already begun forming, ensure regular cleaning maintenance is performed by either a plumbing professional or yourself in order to clear any existing clogs before they become too large.

Tree roots can cause a significant blockage within sewage lines when they penetrate the line and force their way towards the drainage. This blockage can impede the flow of sewage away from your home and lead to a backup in areas like bathtubs.

To avoid such an occurrence, it is important to maintain knowledge of where there are trees on your property, as well as how large they have grown. Regular plumbing inspections can also identify any signs of problems before they start.

Sewage backup into a bathtub can occur when the sewer line leading away from the bathroom fixture collapses or becomes blocked by an object. When this happens, the pressure of waste trying to leave the sewage pipes increases, causing it to travel in the opposite direction and flow up into the bathtub. This could be due to damage from invasive tree roots, corrosion due to aging pipes, or simple clogs like hair, toiletries, and food scraps that are flushed down the drain.

Corrosion And Aging Infrastructure Of Pipes

In some cases, corrosion and aging infrastructure of pipes can be the root cause of a backup in your bathtub. 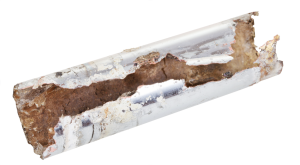 Oftentimes, this is due to corrosion build-up on the interior surface of plumbing lines that will eventually reduce diameter and lead to higher friction in the line due to decreased discharge flow. This can result in an increase of negative pressure and push sewage back into the bathtub drain, resulting in a messy cleanup.

Sewage backups in bathtubs can also be caused by inadequate plumbing venting. The sewer gas that is created when wastewater flows out of a home needs to escape through the house’s drain system and out into the atmosphere in order to provide healthy indoor air quality. Without appropriate venting, this gas will remain trapped in the drainage lines creating a vacuum-like effect which causes water, including sewage, to be pulled back up the pipes into unwanted areas such as the bathtub.

Sewage Coming Up Bathroom Drain: What To Do

Sewage backups are not only unpleasant but can cause significant damage to your property if not addressed quickly. You should consult with a professional plumber immediately when such problems arise in order to ensure it is resolved properly and to avoid further damage.

Solving this type of issue will likely require either blockage removal or piping repairs and possible replacement. Having a plumber assess your sewer line is important as they can locate the source of the problem and implement the best solution to prevent further damage from occurring.

If you’re looking for a trusted plumber in the Hampton Roads region, contact us at Newman’s Plumbing. We offer 24/7 emergency plumbing services and can send one of our experienced technicians to assess your situation and quickly and efficiently resolve it. Call us at 757-465-0883.